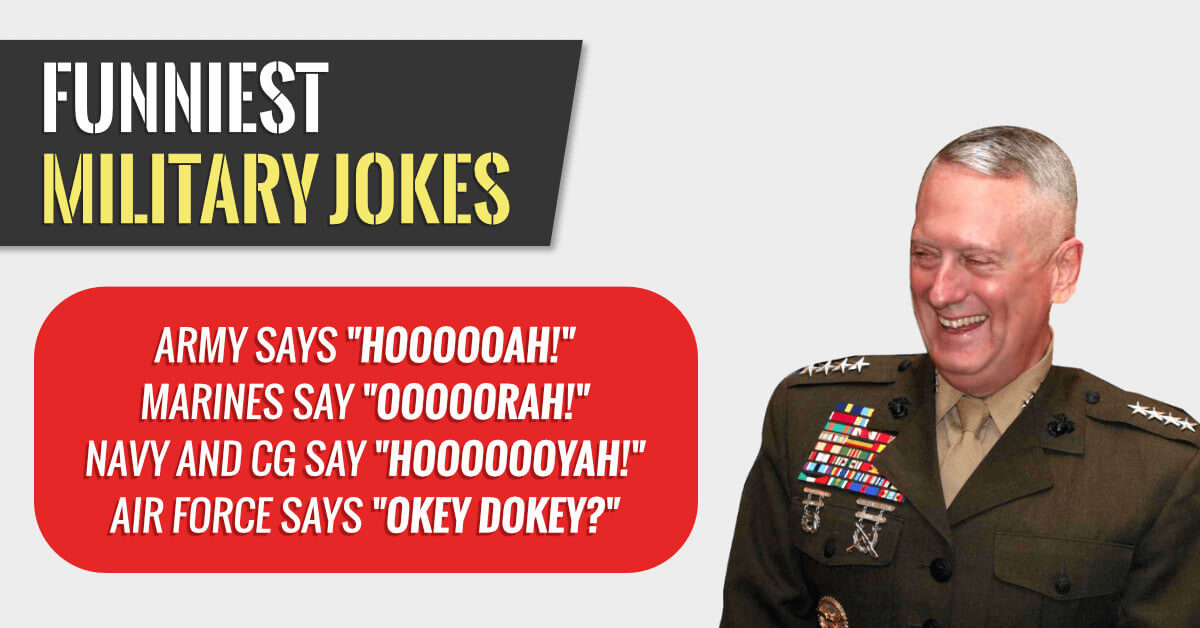 Every military branch thinks that they’re the best, the most important, and in their own way the hardest working. There are so many funny military jokes and jabs out there so it took me a while to compile a list of only the best.

Some of the jokes on this list you may not fully understand or appreciate unless you were actually in the military, but most of them I think anyone can appreciate.

Ask the Army to secure a building and they will set up a perimeter around it and make sure nobody gets out.

Ask the Marines to secure a building and they will charge in, kill everybody inside, and then set up defenses to make sure nobody gets in.

Ask the Navy to secure a building and they will turn off all the lights and lock all the doors at 1700.

Ask the Air Force to secure a building and they will sign a 10 year lease with an option to buy.

A visitor, returning to Kuwait for the first time since the Gulf War, was impressed by a sociological change. On previous visits, she noted that women customarily walked about 5 paces behind their husbands.

She observed that the men now walked over 20 paces BEHIND their wives! She approached one of the women for an explanation: “What enabled women here to achieve this marvelous reversal of roles?” “Land mines,” replied the Kuwaiti woman.

An Airman, Soldier, and Marine are sitting around talking about hardships they faced on their last deployment.
Airman: “The worst was when the air conditioner in our tent broke and it was 110 outside!”
Soldier: “WTF, you had air conditioners?”
Marine: “Wait, stop. You had tents?”

What Do You Call a Soldier Who Survived Mustard Gas and Pepper Spray?

How does the Air Force Play Bingo?

An Army Drill Sergeant took some recruits the the mess hall. After everyone had made it through the chow line, he sat them down and told them “There are three rules in this mess hall- Shut up! Eat up! Get up!” Checking to see that he had everyone’s attention, he asked, “What is the first rule?”

Much to the amusement of the other instructors, 60 privates yelled in unison, “Shut up, Drill Sergeant!”

Did You Hear About The Accident at the Army Base?

As we stood in formation at the Pensacola Naval Air Station, our Flight Instructor said, “All right! All you dummies fall out.” As the rest of the squad wandered away, I remained at attention. The instructor walked over until he was eye-to-eye with me, and then just raised a single eyebrow. I smiled and said, “Sure was a lot of ‘em, huh sir?”

What do Marines have in common with other members of the Armed Forces?

They all originally set out to become Marines

A Soldier and a Marine were sitting next to each other on a plane. The Marine took off his boots and began to stretch out. The soldier swore under his breath at the Marine and told him he wanted to get up and get a drink.

The Marine insisted that since he was in the aisle seat he would get it for him. The Soldier agreed, and when the Marine went to get his drink he started spitting in the Marine’s boots.

When the the Marine came back the Soldier nodded and thanked him for the drink, very pleased he pulled one over on the Marine. This happened several times times throughout the flight.

When the plane was descending for the landing, the Marine put his boots back on and quickly realized the Soldier had been spitting in his boots.